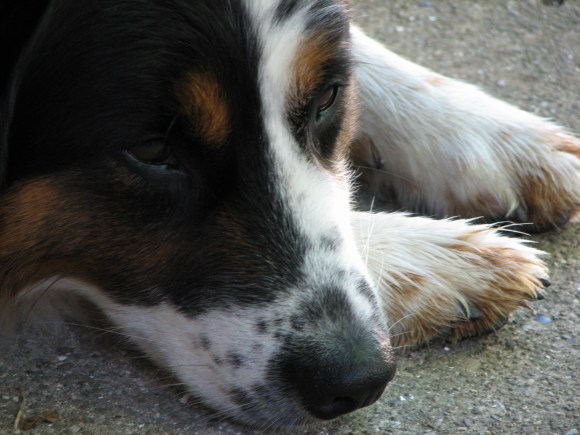 After the puke on the carpet, the decision seemed so right and so timely. The girl was sleeping, and I finally had a moment to sit and…wait. What’s that orange spot on the carpet? Sigh. It had been sitting a while, and certain to stain. There’s enough shit, puke and other sticky piles around the house now that there is a baby in charge. The dog has lost permission to contribute.

But alas, no stain. Simple water and a dish towel can work magic sometimes. So when our dog sitter called and said, yes, she’d be happy to give Loki a new home, I just couldn’t do it. More than the miracle non-staining puke, he’s just about the best dog on the planet. And we love him. Shedding, shit-rolling, baby toy stealing and all.

He’s just not our number one anymore. I never thought it would happen in our house…but he’s just a dog. He’ll have to roll with this new role.

See, about nine months ago, a new shitting and puking dependent snuck into our house. Well, not exactly. Tom likes to tell Johanna that she just fell out of mama, but I remember it being a bit more work than that. But her arrival has reorganized our pack. We are constantly scrambling to see who gets the smile, and who gets the dirty diaper. Or, most common…who gets the sleep. [Hint: if she’s not sleeping, nobody is.] It’s like waiting to be knighted. Or executed. The girl waves her stubby, earth worm segmented arm, and it is made so.

I used to be this organized, careful, confident person. Now I lose my wallet, neglect my friendships and shave my legs an absolute maximum of once a week. Unlike Loki, my new role is taking a harder toll.

There are days I’d like to find a new home myself. All I need is a cozy bed in a corner and some fresh air once in a while. I won’t even bark at the mailman. Promise.