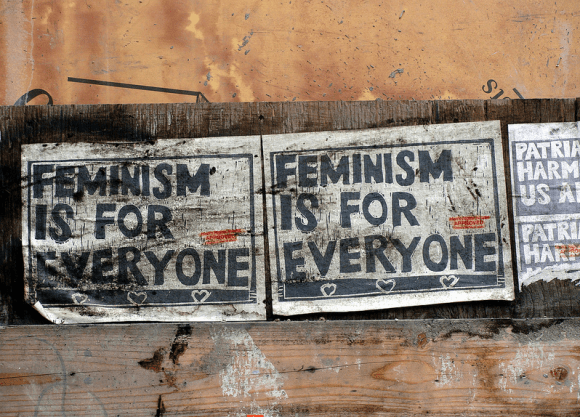 Feminism has been a de facto four letter word for most of my adult life. People *relish* saying fuck, but shrink from feminism. Shrink is an apt description…I can imagine the effect of the word feminism on a man’s dick is one wholly opposite from fuck.

Feminism is the most offensive f-bomb.

Enough with the disclaimers

Women, please, please, for the love of goddess, stop using qualifiers like ‘I’m not a feminist, but…’ We have all noticed that whatever words come after a not-quite-apology like that are guar-an-teed to be of the feminist realm. Own it already.

I started identifying as a feminist in the 7th grade, and haven’t wavered meaningfully¹ since. It was easy at first. Lucky to come of age in the fairly unsexualized time of flannel, grunge and Doc Martens, it was actually cool to identify as a feminist in the early-to-mid 1990s.

One of my favorite complicated female film characters arrived in 1995. Celine in Before Sunrise identifies as a feminist, and talks about feminism a lot, even throwing it under the bus at one point. The entire film consists of conversation [a literate, philosophical one at that, *swoon*] and feminism is peppered into it generously, without qualification or mockery. This seemed natural enough to me.

The first stage is always denial

I never got the memo when feminism started going out of mainstream vogue. I’ve since learned about whitewashing and exclusion of women of color, but in navel-gazing youth, I was myopically puzzled at it what seemed like surrender of such a powerful, useful f-word. If you need to brush up on early feminists who were also women of color [cause they were there, y’all], check out this excellent list.

Sometime in college, a classmate began an incredibly astute cultural criticism with ‘I’m not a feminist, but…’ My mouth dropped open. I knew this women. And I listened to her statement. She was most definitely a feminist. I could see this, why couldn’t she? Or more aptly, why was she unwilling to claim it?

Stunned at my feminist-denier classmate’s deliberate shucking of a trait that I regularly ‘admitted’ with pride, I started noticing the shift. She was the first of many strong-minded and independent women I have heard utter that disclaimer. Like, non-stop, for the past 20 years.

Though I never stopped identifying as a feminist, I sort of slipped underground for a while. Marriage and family can do that to a woman, if you’re not super careful. A more active—I dunno, coven or something?—might have helped me through early motherhood with more of myself intact. So, once I recognized how much I needed feminism to keep me whole, I started combing for cultural cues again.

It’s been a couple of years of watching and collecting and marveling at the incredible reinvention of feminism. One of my favorites is this TED talk:

Courtney Martin talks about increased inclusivity, equity over equality, and democratic accessibility through digital means like blogs, Facebook and Twitter. Feminism can reach into the developing world, so surely it can reach moms like me, marooned in the mainstream, desperate for a lifeline to a means for social change.

The revolution will be digitized

When popular Twitter hashtag #NotBuyingIt becoming an app, I downloaded it immediately. And today The Representation Project posted this article from PolicyMic, detailing 23 Awesome Feminist Digital Campaigns. You can’t swing a cat without hitting a feminist these days.

Um, I’m sort of giddy about it.

Not everyone’s a fan, though. What’s been called the War on Women has pushed back against this, what? 5th wave of feminism. Caitlyn Moran, my favorite strident feminist contemporary, points out that, with all these subsequent waves, aren’t we really just observing an incoming tide?

Is it really all just about our private parts, then? Gotta go Caitlyn Moran again, who has the ultimate ‘are you a feminist?’ test.

Yes? Congratulations! You’re a feminist. Now go drop some that f-bomb like you mean it.

*Of course men can be be feminists. I’m married to one. Modify this quiz in the following way: next time you reach into your woman’s pants—consensually of course, but that goes without saying, right?—ask yourself, are you totally cool with what you find there? Hair, no hair, whatevs? Do you, without exception, want her to be in charge of it? No matter what? Congrats, bro! You, too, are a feminist! Sexism is bad for you, too, so get out there and use your voice. We need you to help fight the fight the shrinkage, er, I mean patriarchy.

← It’s safer to *have* a genius
Glitches in my matrix, in footnotes →