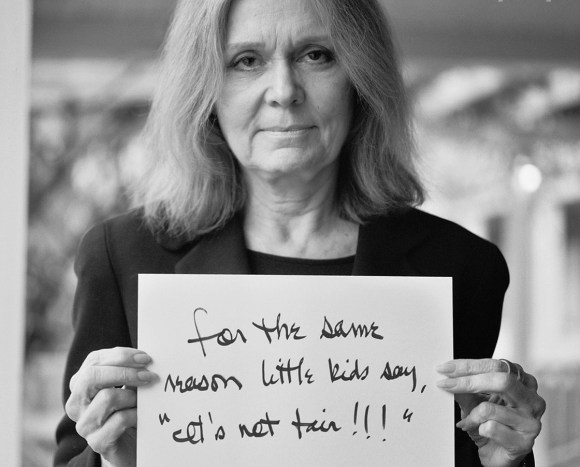 When Gloria Steinem walked onto the Severance Hall stage in Cleveland Tuesday night, I screamed like the fan girl that I am.

The first time I heard Gloria Steinem speak was in the opening montage in If These Walls Could Talk, a vignette narrative film about Roe v. Wade and abortion from 1953 – 1973. Several historic clips were used to give context. Hers? “Honey, if men could get pregnant, abortion would be a sacrament.”

I was immediately smitten.

It was the way she commandeered a sacred word for such an electrically taboo topic that appealed to my tiny internal rebellion. Catholic raised and Catholic schooled through high school, I was two years into my term at a small Franciscan college. For those of you keeping count, yes, Catholic too. Struggling with my own personal position on abortion [hence the movie], my admiration for Steinem was not about her position on reproductive choice. It was the incredible wit and turn of phrase she effortlessly delivered, completely deadpan. The abortion/sacrament line has become a Steinem classic, providing a particularly sharp end to point out the double standard in reproductive rights.

When I purchased my ticket, besides deepening my understanding of feminism, I was hoping for some great one-liners…and was not disappointed. At 80 years old, granny Gloria is still hella-spry. It wasn’t until she was introduced that I realized it was a homecoming…she’s from Toledo. It’s a silly thing to get excited about, sharing a home state, but there you are.

When my husband asked later what my friend Gloria had to say about the state of feminism, I found myself pausing, overwhelmed. We talked about *everything*. She did, I mean. Economic policy and reproductive rights and racism and how we raise boys and pay equity and college debt. I’m not even sure she used the word feminism.

Steinem has fronted feminist campaigns for two generations, and shows no signs of hangin ’em up. As the face of a movement that is often written off as anti-man, Steinem is no man-hater. Her deft and comprehensive synthesis of the issues we face — as humans, and specifically, as Americans — deepened my appreciation of feminism as an across-the-issues primal scream for equality. For everyone. Men and boys are regularly hurt by the patriarchy, though they might not admit it. Or identify the elusive source.

One word she kept revisiting was empathy. Empathy for the little boys who are socialized to never be seen as weak, to use violence to control, to seek high paying — but perhaps unfulfilling — careers. What did they want from life? she wants to know. What might they have done differently if unbound by a masculine-at-all-costs rulebook?

Steinem taps empathy to bridge the gaps of communication, to find common ground between the sexes, races, and classes, all.

As if I needed another reason to be smitten.

10 Steinem quotes that prove feminism is for everyone

“If we paid women of color equal to how we pay white men, we would add $200 billion to our economy. That money would be spent in the economy, not funneled into Swiss bank accounts. We’d have been better off passing pay equity than bailing out Wall Street.“ On how economics, race issues and gender cannot be compartmentalized.

“A pedestal is just as much as prison as any other small, confined space.” This is often attributed directly to Steinem, but she was quoting an unnamed African American female abolitionist. Dammit! White privilege at work, right there.

“Since 9/11…more American women have been killed by husbands and boyfriends than Americans were killed on 9/11 and the wars in Iraq and Afghanistan, combined.” On the can-they-be-real statistics of violence against women and girls.

“The thing older men always want to talk about with me is the pain they still carry over not having a nurturing father.” Not speaking about absent fathers, she was commenting on the disservice culture does men by insisting they refrain from ‘feminine’ traits like empathy and listening. Our boys crave that love and nurturing from *both* parents. Steinem insists that we will not have equality for women in the workplace until we have equality in men raising children. When men feel free to express love and nurturing for their children, perhaps they will loosen the white knuckle grip on workforce culture, knowing they will be valued either way.

[This is where people tend to dump feminism, all, men raising children?! Like it’s this big switcheroo where women take men’s jobs and men put on the apron and hip-hold the baby — which some families manage just fine. She is speaking to the empathy issue again…paid maternity *and* paternity leave; each partner feeling valued in every aspect of their contribution. A woman should be able to choose and thrive in the executive track, a man should be free to pursue his art. When we understand each other’s struggles intimately, we are more likely to become invested in allaying that struggle.]

“It took me 20 years to get over my college education.” Pssht. Bout right. She went to Smith College, and this was still her experience. Is there any hope for recovery from 16 years of Catholic education?

“Do not worry about what you *should* be doing, do whatever you can.” On activism and purpose. And probably perfectionism, too.

Anything that takes the tyranny of should to task has my support and gets the last word.

Another one I just discovered: “Writing is the only thing that, when I do it, I don’t feel I should be doing something else.” Speak it sister. Probably why I posted two pieces yesterday, after not being able to finish anything all summer.

If the call is to use what I have and do what I can, writing is my answer. What’s yours? Let me know in the comments.