Give rejection the awkward hug it deserves

Think about the time we spend engaged in debate: pleading, proving or otherwise bargaining for ourselves and our perspectives. At work. At home. In the classroom. In our own minds. On social media, especially. Sometimes we offer a point of view rooted in our most cherished beliefs, our deepest convictions. More often, though, we might find ourselves frothily insisting that, yes, we are sure we refilled the goddamn printer paper.

No matter the bargain, most of us dig in savagely when met with a response we don’t like. And just because I’m curious: why do we *also* excitedly talk over the kindred spirit we’ve discovered who actually agrees with us? But that’s another post.

In rejection, brevity and clarity is a gift

In early September, I sent an essay to two digital magazines through a platform called Submittable. I uploaded my doc, wrote a pitch, bio and click. Submitted. It feels a little impersonal, sure, but you get to skip the later junk folder trolling, waiting for a response from an editor that you just know should have come by now. Did they get it? Did they open it? Should I follow up? Did they hate it and are mocking my mixed metaphors at the watercooler?!?

First off, editors don’t have that kind of time. Secondly, just. It’s all going to be ok.

Witness the reassuring editorial movement of your work: Received, In-progress, Accepted or Declined. With a rejection, there is a still place for feedback, and an editor might soften the blow with something such as, ‘loved the writing, but this isn’t quite right for us.’ Mine was a clean, one word rejection. Declined.

While I was disappointed, the brevity and clarity was surprisingly freeing. If my piece had been rejected in typical email form, I would have parsed every word typed [and, let’s face it, every word left untyped]. I might have even been tempted to write back, my ego jonesing for just one zipless pity fuck. Such madness would have extended the fruitless ruminating, if not the actual communication [also fruitless]. Isn’t that energy better spent pitching another outlet or writing something new altogether? It was like, ok, nope, next. That, and Barbara Kingsolver swooped in with this soul-saving salve for writers everywhere:

“This manuscript of yours that has just come back from another editor is a precious package. Don’t consider it rejected. Consider that you’ve addressed it ‘to the editor who can appreciate my work’ and it has simply come back stamped ‘Not at this address’. Just keep looking for the right address.” — Barbara Kingsolver

It should be noted that Kingsolver once sent me a lovely reply to a letter I sent after reading Animal, Vegetable, Miracle. Literally and figuratively, I got the address right.

In this Submittable rejection example, the essay I sent was raw, tender, personal [most of mine are] and examined marriage, self and mental health. Working on it all summer, I poured a dangerous amount of myself into it. Then there was the time vetting literary venues where it might find a happy home. All that, and here were my hopes dashed with a Decline. And yet. I was amazed at how much mind space it freed up, just embracing the rejection.

Less fuck off, more shuck off 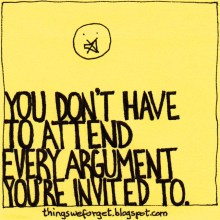 What about when the stakes are lower? I’m talking about virtual life. How often do we spend time in a semantic octagon at the expense of pursuits we enjoy? Do we ever benefit from entering the fray over another controversial topic on social media? Will any of our pleading or well reasoned arguing actually change someone’s mind?

Anyone who’s spent a modicum of Monday on Facebook knows a mind-changing mission is laughable. Facebook has been around long enough to underwrite untold doctoral social experiments, all positing one incontrovertible since-proven thesis: our appetite for sniping, judging and berating each other is insatiable. What did Mark Twain say about social media?

“Never argue with a fool; onlookers may not be able to tell the difference” — Mark Twain

Oh, right. Not exactly about social media per se. Still.

Maybe this is not a biggie to most people, giving people the shuck off like this. For someone who has experienced every moment of my life as an emotional transaction, this feels like a goddamn insurrection. Gloriously so.

Certainly, there are things that deserve our complete attention, energy and outrage. Thankfully, those things are usually easy to discern. Sometimes they even make themselves known via social media. But before you chime in on the mishigas and the mundane, why not pop a nope or two, and close your browser? Mute the conversation. Turn off notifications. Do whatever you need to do to make the break clean and complete.

Then there’s the real life shucking. Trapped at a relative’s house? Make a swift but discreet exit from the Thanksgiving table and retreat to the basement with a podcast. At home? Turn back to your novel, and let your complaining teen puzzle alone over the meaning of your sudden silence. Who cares. You’ve Declined. Don’t parse the words spoken, written or omitted. Just reject. Reject outright, and don’t look back.

Give that shit the cold shoulder it deserves.

The irony of embracing that which would rather just not

Is it me, or does this look like just one kangaroo fighting with himself in the mirror? Shit, been there. *Decline*

Embracing rejection demands willingness to give as well as receive it. When it’s your turn for dismissal, take it as the probably not-at-all-personal ‘no thanks’ that it is. Keep seeking that right address.

When you are in a position to decline, do it swiftly, kindly and—this is the important part—completely. My favorite parenting response to a looming negotiation is “asked and answered.” Otherwise that shit goes on forever. When you must reject—and you will, you should—express as briefly and clearly as you can, ‘you seek someone to appreciate your work; not at this address.’ Decline and regain your peace of mind.

Rejection is not bad for us. The grace with which we accept things not meant for us—whether Buddha said anything or not—is a sign of maturity, and probably badass wisdom. Rejection is coming for us all eventually anyway. Next time you meet, consider hugging it a little tighter, for the gifts it provides.

Or, ok, given it’s temperament, maybe just air five it from afar.

← Evelyn from the internets calls in black
Writers die of “exposure” →