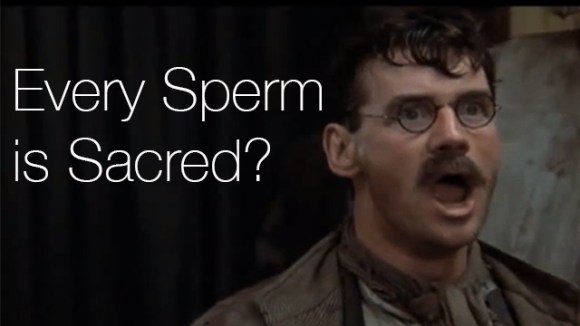 Doubling down on a double standard?

But Jezebel’s article on Vasalgel is far more blunt:

Especially now, when a war is continually being waged on women’s reproductive autonomy under the flimsy auspice of “sincerely held religious beliefs,” it would be interesting to see how male contraception is treated. As the saying goes: “If men could get pregnant, abortion would be a sacrament.” If men could have semi-permanent contraception procedures, would their insurance coverage constitute a violation of religious beliefs? Somehow I doubt it.

I suspect the religious freedom argument will cease mid-sputtering breath if semi-permanent male contraception becomes viable. Worse, how much you wanna bet Vasalgel — like the popular penis prop-er-upper, Viagra — gets swept right up under the insurance umbrella, like, stat? And [sigh] the Pill, IUDs and abortion will remain ‘social issues’ to be argued by politicians hunkered down in their Fox holes? World without end, amen.

Vasalgel could be a culture changing development, akin of The Pill in 1960, usually heralded as the most influential invention of the 20th century. The Pill made the sexual revolution possible [and enjoyable, holla] for women. Beyond the stunning ovulation-tweaking-magic, contraception controlled by women changed our culture. Um, it scared the bejesus out of people. Though shaken, misogyny righted itself swiftly enough. Women, you go ahead and control your pregnancies [for now…. you can almost hear the chilling, time-traveling whisper], but *we* will control your reputation and ‘marriageability’.

Bottom line? For a man, contraceptive use is responsible behavior. Women who exercise the same forethought? Sluts, y’all.

The cultural ripples of female-controlled contraception have been traveling for over 50 years. Like any physics-obeying body of water, the farther ripples travel, the harder they hit shore. Look no further than the recent invasive restrictions on women’s reproductive health and choice for metaphoric proof [see: women who claim their sexual agency scare the bejesus out of people].

The obvious problem still remains …as much as a long term male option might take the contraceptive load off women, if it fails [or worse, is fibbed about by an untrustworthy but still-gets-off-scot-free male sexual partner], the risk load of pregnancy is still a woman’s to bear. Vasalgel offers no real respite from those risks.

But. Could it tip us into a cultural shift toward equality in sexuality? Covered contraception for all. Destigmatization of abortion. Perhaps, if the religious freedom argument somehow sustains itself, once men see how blindingly frustrating it is to have your physical agency and sexual freedoms limited, we’ll get the change women have been begging, fighting and dying for. They could be our greatest ally in gaining the freedoms we all deserve. But only when we all have skin in the game.

What do you think of a hormone-free long-term male contraception option like Vasagel? Viable or unpromising? Would it change your sexual behavior? Does it present is an opportunity to dismantle gender-based double standards, or deepen it?

For more details on the product itself, including why you’ll never see them on Kickstarter, visit the FAQ page.

← The flip side of writing: voracious reading
Rebecca T. Dickson on owning your story →